Our Vita-Bugs have enhanced Vitamin E, Vitamin A, Beta-Carotene, Omega-6 and Omega-3 Fatty Acids. Let’s get this out of the way – Vita-Bugs are NOT gut-loaded. Have you ever wondered why captive reptiles and other insect-eaters need their food supplemented with various dusts and gut-loads? Certainly insectivores in nature don’t need their food altered in any way.

Ever wonder why wild insects contain more nutrients that are so critical to the health and well-being of wild reptiles? Wild insects forage a wide variety of food sources that contain a wide array of nutrients – many of which they absorb into their bodies. In contrast, commercially raised feeder insects are exclusively fed low cost foods formulated for rapid growth and reproduction with no consideration for the nutritional composition of the insect.

We’ve just proven that insect eaters that consume more nutritious insects are healthier. Can the same be said for the diet and overall health of the insects themselves? Of course it can – and we’ve proven it.

Vita-Bugs® are the result of years of research and development targeted at improving the nutritional profile of a feeder insect product line through a quality food source during the entire growing process, to deliver those nutrients directly to insect-eaters. Vita-Bugs® utilize a patented food throughout their lifetime specifically formulated for insect consumption, fortified with nutrients like Vitamin A, Vitamin E, Thiamin and Beta-Carotene just to name a few. Not only does the feed itself contain these vitamins, it’s also scientifically proven that they are actually consumed and retained within the tissue of the insect. Again, Vita-Bugs® are NOT gut-loaded.

Check out these charts comparing the nutritional value of insects in the wild vs. standard commercial insects vs. Vita-Bugs®. We call this difference between the diet of captive and wild insect-eaters the “nutritional gap.” Vita-Bugs® bridge that gap.

Since Vita-Bugs® don’t contain calcium, what good will they do for my reptile?

Vitamin A – Beta-Carotene and other carotenoids are IMPARATIVE in reptile coloration.  Without proper carotenoids, your reptile will never reach its full potential.  Vitamin E is also directly related to immune system health which can impact its ability to fight off sickness and disease.

What about dusting and gut-loading?

Dusting and gut-loading are tried-and-true methods to utilize feeder insects as a vehicle to deliver commercially prepared dusts and gut-loads. Unfortunately, many insects groom themselves rapidly and shed any dusts effectively, making dusting problematic. Also insects like mealworms and superworms have a slicker body than crickets making it difficult to get dusts to stick to them.

Gut-loads are equally as inconsistent and complicated even in the hands of the most experienced keeper or pet owner. First of all, a word of caution – a majority of gut-loads brands on the retail market, whether dry or high-moisture, make blatantly false claims. Often time the vitamin or mineral is unpalatable and not consumed by the insect, other times the form of the vitamin is so large it’s impossible for the insect to consume it. There is a published article that even proves that several of the retail gut-loads don’t even contain the concentration of nutrients promised on the label!

The good news is that the same article also proves that there ARE high quality companies producing beneficial gut-loads for retail. Use sound judgment and be skeptical of promises on labels. It is recommended that feeder insects feed on quality gut-load products for 24-48 hours before being fed to the insect-eater. Unfortunately, insects cannot process the abnormally high levels of nutrients that are packed into quality gut-loads so they become toxic to the insect fairly rapidly – forcing you to keep two colonies of feeders.

Concurrently in the 24-48 hour timeframe of feeding on a gut-load, the insect cannot possibly absorb any meaningful level of nutrients into its body. Therefore, gut-loading is completely dependent on the physical contents of the gut of the feeder insect.  With that in mind, keepers have to be certain they are delivering an extremely high quality gut-load in a timeframe that ensures the insect does not expel those nutrients before consumed by the insectivore.

A few months back, world-renowned breeder Brian Barczyk wanted to discover what was the best and most nutritious way to feed his lizards at BHB Reptiles. His standard practice was to either gut-load his feeder insects or dust them with vitamin and calcium powders. His question is; is it possible that a nutritionally enhanced feeder insect line can be capable of carrying the same or even more nutrients than the traditional methods reptile and amphibian owners had been using for years?

Brian set up three groups of Bearded Dragons that were all hatched within days of each other. Each group contained 12 babies that contained the same exact genetic makeup. The first group would be fed crickets that were dusted, as his staff would normally do. The second group would be fed crickets that were fed on a commercially sold “gut-load” diet. The last group were fed a combination of Timberlines’ Vita-Bug® crickets and CalciWorms®. The animals were raised in completely similar setups and had the exact same feeding schedules. As the test went on two factors were tested, overall animal weight and the eyeball test, or how healthy and attractive looking were the animals.

By the end of the first month significant results were prevalent. By the end of the second month not only did the Vita-Bug® groups growth exceed the other two options but their colorization was astonishing comparatively. The last month continued without any major surprises and the Vita-Bug® group continued to separate itself from the other two groups.

Brian’s overall findings are quite noteworthy. Not only was the Vita-Bug group the healthiest but also had the best colorization. Additionally the Vita-Bug® and CalciWorm® combination method was the easiest way to care for the lizard groups. No more worrying about whether the employees were supplementing the insects or reordering vitamin supplement supplies when they are low. Brian has now switched all his lizard groups to Vita-Bugs® and is enjoying the time and money savings as well as seeing the health of his breeding groups explode with the switch! 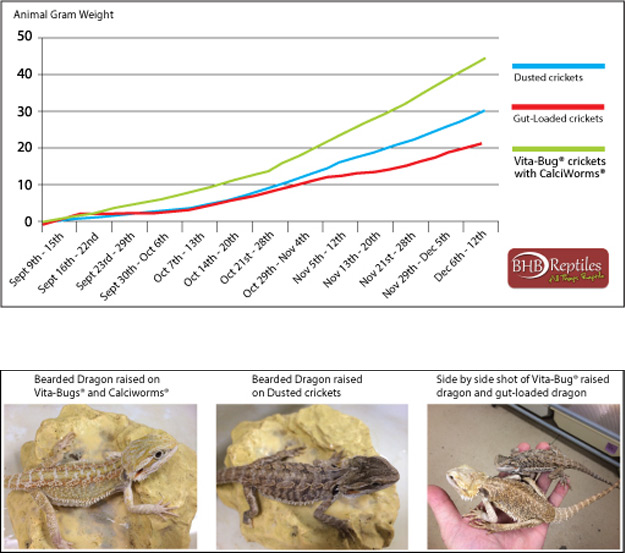